One of my friends and fellow authors at RWBB blog has an exciting new release
For Women Only from Loose Id out today. She dropped by my blog to share a peek at her release and tell us more about what makes her tick! 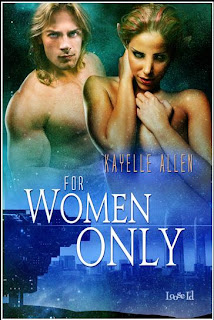 **Warning: this book contains smokin' hot sex, humor, and angst. This combination has been proven to be addictive.**
Content: Explicit sexual content, graphic language, and situations that some readers may find objectionable: kidnapping, some violence, reference to abuse, reference to off-screen male rape
For Women Only

When Kin Ambassador Mehfawni Ruh visits the capitol planet of the Tarthian Empire, she meets the human Khyff Antonello, a master of pleasure who satisfies her every craving for illicit and taboo sex. She expected a fling, but found love.
Upon discovering her own people devastated his family, she longs to restore all they destroyed, but some tragedies can never be reversed. Her family demands she cast out the human, for if she keeps Khyff, she must deny her heritage and abdicate her future as ruler of her world. Mehfawni searches for an alternative, and stumbles upon Khyff’s darkest secret. Now, she must determine whether his fragile trust is the response of love and a healing heart or a ruse for revenge.

Guest Author Interview with Kayelle Allen
I’ve had the writing bug since I was a kid. My mother loved to paint and write, and she was always doing crossword puzzles. I’m sure I drove her crazy with questions about words. Once time I asked her “What’s a four letter word ending in K that means intercourse?” When she gave me her huge, wide-eyed shocked-mother stare, I grinned and said, “Talk.” LOL
I write Science Fiction Romance, Fantasy, and Contemporary. Within those genres I have written erotica, erotic romance, and glbt.
I grew up all over the and in one year, attended five different schools. My parents were vagabonds at heart. In the past twenty years, I have changed addresses three times. Once, when the city renumbered streets and we hadn’t moved at all, and the other to move into the house where we lived for twelve years. Last year, hubby went back to college and to save money, we moved in with friends. We’re six months in and so far, we’re all still friends. One year to go...
I have an uber alpha who’s rich enough to buy a planet. Luc Saint-Cyr is dominating, while at the same time has a tortured past and is isolated by circumstance. When I need inspiration or to get into the flow of how he looks, carries himself, or sounds, I watch something with actor Dennis Haysbert in it. He’s currently the Allstate spokesperson. “Are you in good hands?” *melt* I love his voice, and he could portray Luc in film with no difficulty.
Luc’s inner strength and the nobility of spirit are two of his best assets. The fact that he’s 6’5”, built like a tank and yet is capable of tenderness with his lover endears him to readers. He was first introduced in At the Mercy of Her Pleasure and was the bad guy … no, good guy … er, bad guy… Let’s say every time you saw him you would be sure he was the villain, and then the next scene he would redeem himself, only to completely tick you off in the next one. Readers emailed me wanting to know when his story was coming. I hadn’t planned one at first, but he intrigued me, too. LOL Eventually, I worked out a backstory and as I did, a lot of details popped up.
I think readers like him because part of them knows he’s dangerous, but the other part wants to pet the wild animal and make it happy. He’s known as the Harbinger, and when he can’t hear them, some call him simply “the ” Because he was once the head of the Thieves’ Guild, those in the underworld of crime won’t say his name at all. Why? One, he protects them, and two, he scares the dickens out of them. He’s legendary. In the book At the Mercy of Her Pleasure, Luc’s adopted son is mugged, and because the young man is half human, the cops refuse to call for help at first. Later in the story, when asked if anything is being done about the cops and their dereliction of duty, Luc responds that it’s too late for that. They’d been shot and killed only an hour before. He says it was “In the line of duty, so they tell me.” The one who asked is thinking, “I’ll just bet.”
As above, Dennis Haysbert. Luc wears formal business attire or evening wear. He’s quite comfortable in a tux, and manages to look fabulous even in jeans. Put him all in black, with his dark chocolate skin, and his usual solid black contacts that cover his entire eye, and Luc is six feet five inches of solid predator.
The suave and sophisticated Luc needs no pick up lines. Women (and men) made themselves available without his having to ask. Luc enjoyed both genders, but preferred Kin males. However, in his new series, Surrender (Love, Trust, and Will), he meets his forever love, the Kin Izzorah Ceeow, and the days of being a bachelor are over. Luc wants no one else. Izzorah is nicknamed Rah, which means passion in Luc’s native language. When they meet, Luc trips over his own tongue and stammers like a teenaged boy on a first date. It’s an endearing and sweet scene.
How about an excerpt? This is from At the Mercy of Her Pleasure, available at
Setting up the scene: NarrAy Jorlan has hired professional thief Senth Antonello to steal back an heirloom confiscated by the despotic empress. In itself, the item has only sentimental value, but in it, NarrAy's parents hid a code to finishing the secret technology they were developing before they were murdered. After meeting Senth in person, NarrAy returns to her ship. But she can't get the thief's image out of her head…
--------------
All People's Liberation Army Ship Jalane
Officers' Quarters

NarrAy brought Senth's image to mind, picturing him as he'd looked at the Ghost, minus his overbearing master and the audience of her aides.
"Mmm, hell-loh, Senth." Naked before him, she slid one hand up the front of his shirt. "Can I interest you in a sugar-cookie snack?"
He leaned forward, bending down to kiss her, his dark, curly hair a cloak around them. The hesitant brush of his lips against hers made her press up against him, capturing his kiss.
She pulled back enough to speak. "Hold me. Please, Senth, hold me. No one ever touches me. I'm so alone."
Senth drew her fully into his arms and embraced her, fitting the entire length of his body against hers. "I'll touch you anywhere you want, NarrAy. Everywhere you want." He slid his fingers through her hair, his smile revealing fangs. "Let me kiss you again."
NarrAy gripped his jacket with both hands and drew him down.
The wet heat of his mouth against hers brought a crest of pheromones.
Senth slid one hand down her body, cupped one of her breasts, and then bent to suckle her. His rough, catlike tongue against her sensitive skin triggered a line of heat straight to her core. Moisture seeped onto her thighs.
Senth inhaled. "Mmm. You smell so good." He slid his hand down the front of her body and pressed his palm against her outer lips. He slipped one finger between them. "You're wet." He lifted his hand to inhale her fragrance, then licked his finger. "Sweet." He went to his knees before her, his pale blue gaze lifting to hers. "May I taste you?"
She shook her head no, but her mouth said "yes." She leaned back against the wall of her cabin and widened her legs. "Please." NarrAy caressed his face. "Senth, I want your touch."
Antonello Brothers 1: At the Mercy of Her Pleasure (a Tarthian Empire Book)
Available at Loose Id http://loose-id.com
Format: ebook in multiple formats
Genre: Erotic Science Fiction Romance, Action Adventure
Heat level: R=explicit sex
Warnings: explicit content, kidnapping and rescue, violence, reference to former abuse and male rape, pheromone-induced seduction

Currently, I’m working on sequels to two different books. The first is Surrender Will, sequel to Surrender Love, and Surrender Trust. The other is Antonello Brothers 3: When I Breathe. Both are Tarthian Empire books.

Not content to just deliver what you may already know about these writers I have on here, I delve in DEEP to their inner most psyche and massage it, until I get a psychological profile Criminal Minds would be proud of….!
The world is ending in an hour, what do you do, and who do you do it with?
KA: Ending for good, that’s it, finis, finale, end of everything? Well, dang. It wouldn’t matter what I did, really, except to be with my family. I’d want to tell them I love them one more time.
If you were a cheese, what flavor would you be, and why?
KA: Asiago. It’s sharp, good with a lot of things, and once you’ve tasted it, you don’t forget it.
Five things you can take to a desert island, what would they be?
KA: Husband, ebook reader full of books, healthy food, water, and a way off the island.
Finish this sentence: Love is like….
KA: Love is like a waterfall. Sometimes there is so much you are overwhelmed, and then in dry seasons, there is barely a trickle. But it is a waterfall, and in season, the water will be back. Don’t go wandering off. Wait for it.
Finish this sentence: my stories are like….
KA: My stories are like rich dark chocolate. If you don’t like dark chocolate, then they aren’t for you. But if you like it, you’ll find these books delicious.
Favorite action figure or action hero and why?
KA: Jack Bauer from 24. He will do anything it takes, including break the law if he has to, in order to serve the greater good. He’s scary, but I would trust him to do what he says.
Mata Hari or Mother Teresa?
KA: I would like to come across as Mother Teresa, but be Mata Hari. Kind of Mata’s style, huh?
These were fun questions, Chloe!
You can find Kayelle Allen here:
Email
kayelle@kayelleallen.com   kayelle @ kayelleallen .com
Homepage
http://kayelleallen.com
Booklist
http://kayelleallen.com/Books.html
The Edge of Peril - Inside the Sempervian World
http://groups.yahoo.com/group/edgeofperil/
Romance Lives Forever - Group
http://groups.yahoo.com/group/romancelivesforever
Romance Lives Forever - MySpace
http://myspace.com/romancelivesforever
Romance Lives Forever - Blog
http://romancelivesforever.blogspot.com/
Romance Roll Call (Military women writing Romance)
http://romancerollcall.com/
Twitter
http://twitter.com/kayelleallen
Facebook
http://tinyurl.com/facebook-kayelle
Marketing for Romance Writers
http://groups.yahoo.com/group/MarketingForRomanceWriters/

Thank you for hosting me, Chloe! I've been all over the net today and it's been so much fun. I'm looking forward to a good night's sleep tonight, though. Last night I could hardly shut my eyes I was so excited. LOL You'd think this was my first book. I hope I never lose the excitement of the night before a release. It's like a first date or a job interview. You finally get to see what others think.

It was nice to come over and visit a friend and see that beautiful Anne Cain cover. Khyff is droolable. (is that a word?) ^_^

What a great interview ladies. I love love love that excerpt Kayelle. And did I mention that cover is gorgeous. LI had done a wonderful job with all your covers! Here's wishing you many many many happy sales!