First of, yes, I have seen Robin Hood, and enjoyed it. Russell Crowe's latest film efforts is a crowd pleaser. He and Cate Blanchett light up the screen with their understated chemistry, and there are arrows flyin' galore.
I was thinking about the casting of Russell Crowe as the legendary hero, and this mischief maker is perfect! 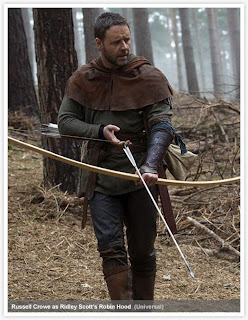 Be careful who you point that arrow at!

Russell Crowe is THE Hollywood Bad Boy.
Case in point?

I read with much amusement about a recent radio interview when Russell got a mite steamed at being told his accent for the movie sounded 'a bit Irish'.

I believe his response was “You’ve seriously got dead ears if you think that’s an Irish accent.”

“I’m a little dumbfounded that you could possibly find any Irish in that character – that’s kind of ridiculous, but it’s your show.”

and finally refusing to answer any more questions he said some colorful things under his breath and walked out of the interview: 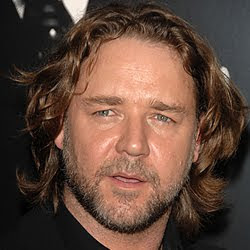 Ah, Russell Crowe has lost none of his edge! He was arrested for throwing a phone at a Mercer Hotel employee because he was enraged he could not get his call out to Australia in 2005. (They later settled out of court). A new book is coming out discussing his various misdeeds and misbehavin'. But would you really want Russell any other way? Unlike the pithy soudbites and 'take my photo on my right side' image conscious stars, this man just doesn't give a sh*t! Hypermasculine, alpha, menacing and intense, Russell Crowe is going to be exactly who he is at all times.