I got reviewed by the lovely ladies at Dark Divas Reviews for her SCP release, Irish Magic...

AJ’s Review:
"Irish Magic is the perfect title for this sexy, sensual read that encompasses engaging characters, witty banter, a bit of heartache, some very interesting Irish legends, and enough fairies’ magic to keep you panting for days because of the scorching hot love scenes.."

And you have a chance to win Irish Magic, FREE, for commenting:

Come visit the Divas link below for your chance to win:

Visit Long and Short Reviews blog for their Stuff Your Stockings Blogfest of giveaways Dec 17th to 21st and comment to win...you can win a free copy of my book Irish Magic http://wcguest.blogspot.com/2012/12/stuff-your-stocking-blogfest-chloe-waits.html

Visit for more details, you must enter comments  for each blog entry during that period to be eligible. I will be announcing the winner on December 22nd! 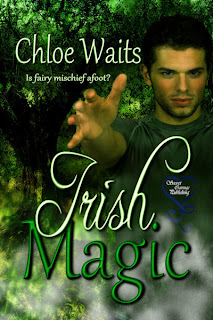 Mysterious Ireland is famous for its magical lore. But Kelly Murphy is here to mend a broken heart; not chase pots of gold. She can’t help being enchanted, though, by the beauty and charm of the land. Not to mention being completely captivated by local hunk and tour guide Sean Ahearn!But it’s more than Ireland that’s seducing Kelly. After wandering onto a fairy hill, Kelly experiences the most passionate night of her life. It’s who it’s with that has her stumped. Is it sexy Sean or is fairy mischief afoot? In a land where everyone believes, can Kelly find the courage to let go of the past and take a leap of faith?
Posted by Chloe Waits at 9:40 PM No comments:

I, Elise Hepner, have commandeered Chloe Waits' blog as part of my blog hop to announce the release of my new book Sextionary:

How to make board games sexy
I have a love hate relationship with board games—mainly that I love them but most of the people around me either don’t have patience for them or they want to play cards instead. Monopoly is my favorite, although I have been known to be partial to Clue and Life as well. When I came up with the idea for Sextionary, I was thinking about all the times my husband and I have played the board game we have sitting in our closet next to the Christmas decorations and crushed by various computer components. I love that game—I really do—for some reason, I never have time for it.
Immediately, I thought, what would make a couple want to play a board game every date night instead of being distracted by everything technology? Why, sex, of course! Add to that my flair for BDSM and board game night just got downright kinky. Sometimes the things we do that aren’t regulated by technology (super hard to find anymore, I know) need a little notch up in order for anyone to actually do them. And it’s something I may have to put to work in my home life.
What are some of your favorite board games? How would you spice them up, if you could? Comment to be entered to win a 10 dollar All Romance Ebooks gift card at the end of my Blog Hop: http://ehwriting.com/blog

Blurb:
One small, sand filled timer flipped Jasper and Jill’s world.
Boring, board game date nights evolved into twenty questions or a spanking. From stimulating conversations—to ripped panties as a makeshift gag. And Jasper’s new fascination with anything leather pulling Jill further down onto her knees.

The Rules of the Game:
Jill draws on paper what she wants from her husband’s lips, tongue, teeth, and fingers
No stick figures
If Jasper can’t guess her needs, he takes over any way he sees fit
Only a minute to shift their roles—but there’s always time for the darkest pleasure—and a line they never thought they would cross.

But don't feel sorry for Donovan, or underestimate him.

Amanda makes that mistake at first, and he soon teaches her she needs to let go of any preconceived notions she has about blindness.


But can she get him to stay longer than a one night stand?


Excerpt:
“Are you excited Amanda?”


“Yes,” she whispered. In truth, she was very excited, more so than she could remember being by any man. Any remaining reservations vanished under his expert seduction.

He smiled, already knowing the answer. His voice dropped a few octaves. “You’re wondering what it would be like to be made love to by a man that knows things other men don’t…who can see you with his hands. Who could touch you in ways other men cannot.”

Amanda didn’t answer. She drew shallow breaths as graphic images flitted through her mind. His grip tightened reflexively on her wrist. Sensual awareness flooded Amanda. Her heightened pulse, her uneven respirations told him everything he needed to know, and he read her like an open book, as though her body was braille.

“A lot of men are only interested in what they see in women. What they narrowly define as beauty. With one, lone sense. They don’t appreciate a woman’s voice. The way her breath quickens as her excitement grows. The scent of her arousal. The smell of her perfume when she’s gone. People are meant to be tactile. Do you know the softest part of a woman’s body? Most men would say her thighs. What about the inside of her wrist? The area behind her knee. The underside of her upper arm. The webbing between her fingers and toes…?”

Donovan raised Amanda’s hand, pressing her delicate wrist against his full lips as his fingers laced briefly with hers.

Her skin burned with his touch and sparks lit up along her spine.

“Her lips, the area behind the ear…”

His hand touched her hair, trailing over the earlobe underneath and moving behind the shell of her ear, to Amanda’s sigh. She swore the whorl of his thumb left an imprint on the tender area, scoring it with heat....

Guaranteed you won't be singing the blues if you had Donovan in your life!


Want Donovan Free?? I am giving away a free copy, to double your chances to win, visit Secret Cravings blog too and leave a comment-- there's a free copy at each blog up for grabs! I will randomly pick a comment at each blog, be sure to give me a way to get in touch with you....I'll announce the winner tomorrow.
Secret Cravings Blogsite

A very worthy blog hop is going on over at Secret Cravings to help support wounded veterans.

If you have time, please visit http://secretcravingspublishing.blogspot.ca/

Visit and follow the blog hop directions there, of clicking on the author's name to get to their blog. Don't forget to leave a comment & your email address.

Those comments will raise funds for this worthy cause. Thank you so much for your support!

Well, I am tickled pink to be invited to The Next Best Thing Blog Hop by writer Carolina Valdez! Thanks Carolina!

As part of the blog hop, I was asked some questions about my writing career:
THE  10 QUESTIONS:

1. What was the working and final title of your book?

My newest release, Irish Magic, with Secret Cravings publishing was released this November 16th! Originally I called it Magic of Ireland as a working title but felt it was a bit unwieldy.
2. Where did the idea come from for the book?
My book is set in Dingle Bay, Ireland, and I actually visited there in the past. My background is primarily Irish, with some Scots and English thrown in.  I am a celtic mutt for sure! I have always believed in fairies and been intrigued by Irish legends, so I wove a real Irish legend in my story about male fairies, called the Ganconagh, who 'seduce lasses.' My heroine, Kelly Murphy, falls for a local man named Sean Ahearn, who she believes she sees one night in the mist. But is it really Sean, or, has she been seduced by something paranormal?

3. What genre does your book fall under?

4. Which actors would you choose to play your characters in a movie rendition?

What an exciting question! I would have to say Nicole Kidman for my female lead, who is a red head, and Gerard Butler for the male lead. He is Scottish, rather than Irish, but his fabulous, hunky looks, and his celtic charm would be perfect. Did I mention I am actually married to a Scotsman myself? Yum.

5. What is the one sentence synopsis of your book?

Who, or what, is seducing Kelly Murphy in Ireland--is it local hunk, sexy Sean Ahearn, or is fairy magic afoot?

6. Will your book be self published or represented by an agency?

My book is published by Secret Cravings Publishing. I am very excited to be a part of the Secret Cravings family now, and that I have a new short release, Donovan's Blues, out soon with them

7. How long did it take you to write the first draft of your manuscript?

Probably a month, as I work full time as a nurse and only have so much time for wriitng, and it's a novella length...

8. What other books would you compare this story to within your genre?

9. Who or what inspired you to write this book?

I am always inspired by romance, love,and passion--and for this story, my own celtic background. I think love is the greatest 'magic' there is!

10.What else about your book might pique the reader's interest?

Thanks for visiting, guys!


Please make sure to begin at Carolina's blog ...https://fingerstothekeys.wordpress.com/

And please be sure to visit some of my fellow authors at Secret Cravings Publishing,
Mahalia Levey, by clicking this link http://mahalia2010.wordpress.com/blog/
Carole Preflatish at her link http://CarolPre.blogspot.com
Vanessa Johnston at http://vanessajohnstonwrites.blogspot.com/
for their answers to these burning questions, and more,  posted on December 10th!
Posted by Chloe Waits at 12:00 AM 2 comments: