Chloe’s Crazy Questions...with ELISE HEPNER!
Not content to just deliver what you may already know about these writers I have on here, I delve DEEP into their inner most psyche and massage it, until I get a psychological profile Criminal Minds would be proud of….!
The phenomenal Elise Hepner joins me today, allowing me to dig around, and also sharing a hot excerpt of her new release, College Trouble.
The world is ending in an hour, what do you do, and who do you do it with?
EH: I would find James Marsters, Christian Bale and some strong liquor and have myself a grand ol’ threesome. Then I would write about it. Assuming I had time.
I think there'd be time, but no one left to read it, sadly, sniff sniff.
If you were a cheese, what flavor would you be, and why?
EH: Cheese is one of my favorite foods, this is a very hard question. I’d have to say swiss cheese is my favorite because it tastes yummy and has lots of holes to fiddle with when I’m bored.
Yes, I don't think anyone doesn't like cheese, if you don't it says a lot about you, and nothing good, I am afraid. (Chloe shakes head). Lucky you're not in that boat, although you may need one for the next question:
Five things you can take to a desert island, what would they be?
EH: My blackberry, my husband, a mini tv that goes anywhere, Gone with the Wind, and lots of 90 block sunscreen.
Finish this sentence: Love is like….
EH: Being stupid together forever.
Finish this sentence: my stories are like….
EH: A horny Emily Bronte wrote them.
Favorite action figure or action hero and why?
EH: Christian Bale as Batman because he wore a lot of suits and it made me very, very happy.
Good choice, an action figure you can play with. He made me happy too.
Now, Mata Hari or Mother Teresa?
EH: Mata Hari

There you have it. Elise may not qualify as a CIA recruit, but she does qualify as an awesome writer.
Here is a peek at her new release! 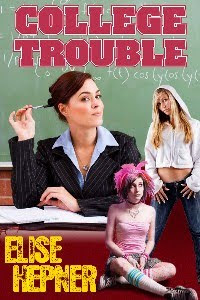 
Clair and Marie have been best friends for years. As

biology becomes an  exploration of their biology when

these drunken slackers need some  relaxation. During

their test they are faced with the consequences of  not

passing when their professor gives them a crash course

Adult Excerpt
“Chick,  chilax, we’ll make it. We always do this time of year. Besides, if we  flunk completely we can just offer an old-fashioned fuck to Miss.  Mouse.”

“You're not serious?” Clair’s chipped nails stopped  midway from delivery at her lip glossed mouth.
“What if I  was?” Marie arched an eyebrow.


Before her roommate could be  scandalized forever Marie plucked herself from the bottom bunk and  crawled over near the open cooler of beer. It wasn't as good as liqueur  but beer was easier to hide in suitcases while riding up the dormitory  elevator.


“Here, you need one before your new haircut and  color explodes” Marie tossed one in Clair's direction and she yanked it  out of the air.
“Hair doesn’t explode, it’s the skull  itself.” Clair rolled her eyes before popping the unsettled beer can.  Beer spritzed out all over the floor as she held the can away from her  body, squealing with delight.
“Well see, you’re learning for  the Bio final already, now drink up before it’s daylight”


The girls  began to shuffle through the mess they’d made, re-organizing purple and  green highlighted notes. Another four hours of studying would be in  order before they could even begin to grasp the comprehensive exam.


Marie scratched her overly bleached skull happy that she had provided  enough refreshments for their cram session. Only nine more beers and  Clair would actually be calm enough to hit the books, or so drunk off  her ass she wouldn’t stress anymore. Whichever came first.
Marie  watched her down several more light beers over the course of their  studying before making her move.


Crawling on her hands and knees towards  her mumbling, drunk roommate, Marie giggled as she crushed popcorn  under her palms. Clair's head was reclining back against the wooden bunk  bed closest to the floor and she was gesturing towards a magazine in  her lap. The v-neck pajama top parted open at her throat as Clair  clutched her sides, giggling and revealing to Marie the supple cleavage  underneath. Marie drew in a sharp breathe midway towards her friend on  her hands and knees. Clair was gorgeous and this had been a long time  coming.


Underneath her tacky purple skull pj's Marie's ass and  hips continued to swivel as she stalked her prey. She felt way too sexy  for a dorm room. Imagining herself crawling across a stage at a strip  club lit with florescent lights her face morphed from carefree to  completely lust laden. Her eyes zigzagged over Clair who had swallowed  six beers in a matter of minutes and was now tapping her nails along the  wood of their bed to a Britney Spears slow jam.


Without a  care in the world the girl placed her cavalier sway right in the way of  her drunken friend’s face, slowly wiping a stripe of hair from her  cheek.


Clair slurred  a little trying to pout before giggling and falling to her back on the  floor. This was her chance. The one she'd been meaning to take with all  these weekly sleepovers for years.


With ease  Marie crawled up Clair's body before sliding her hips in a straddle over  her friends. Before Clair could stop her chaotic blinking, her eyes  large, chest heaving, Marie lay her lips along her best friends  collarbone. She was barely breathing, afraid of making her skittish.


Clair  smelled of tangerines and clove cigarettes. Her skin was pressed with  Urban Decay sparkle powder that twinkled in the low lighting from their  room's lamps. Marie’s fingers skimmed over her roommates exposed  shoulders taking away chunky sparkles on her fingertips. She knew it was  flavored when she popped her fingers into her mouth and tasted Gimlets.  Sparkles clung to her tongue like pressed squares of bursting lime.
BUY HERE

Elise, thanks for joining me today and sharing your good news about the release of College Trouble.