I am very excited that author Tierney O'Malley has stopped by my blog today to celebrate her new release, Passionate Bid! She is treating us to an excerpt, and also agreed to answer a few questions for us:

Chloe’s Crazy Questions
Not content to just deliver what you may already know about these writers I have on here, I delve in DEEP to their inner most psyche and massage it, until I get a psychological profile Criminal Minds would be proud of….!

The world is ending in an hour, what do you do, and who do you do it with?
TO'M: I will definitely grab my laptop, open my book covers folder then stare at the gorgeous models. Okay, seriously now. I’ll spend my last hour with my children and husband. Maybe look at our past, present, and the things that we can do in the future if the world is not ending. I will tell them how our memories and dreams have kept me stronger every day.
If you were a cheese, what flavor would you be, and why?
TO'M: I want to say cheddar because it is my favorite. In fact, it’s the only kind of cheese that I like to eat. But my husband prefers Swiss cheese. So I’ll say swiss.
Five things you can take to a desert island, what would they be?
TO'M: Hmm…my husband is not a thing. So, I can’t add him, right? All right. Five things—a dozen pencils (sharpened), notebooks, one liter of water, a dozen apples, and a picture of my husband and kids.
Finish this sentence: Love is like….
TO'M: a plant. You have to nurture it to grow, to bloom. If neglected. It’ll wilt and eventually die.
Finish this sentence: My stories are like….
TO'M: sunshine on a cloudy. It gives you warmth and a happy feeling. ;)
Favorite action figure or action hero and why?
TO'M: Wolverine. Man, he’s got the abs and the claws. Can’t beat those. :D
Mata Hari or Mother Teresa?
TO'M: Hmm…Mata Hari was one beautiful dancer. Mother Teresa was beautiful inside and out. Was it proven that Mata Hari indeed worked as a spy? She was executed. Mother Teresa received a Nobel Peace Price. Okay, I’ll pick Mother Teresa.
Tierney O'Malley's New Release Passionate Bid Out today. 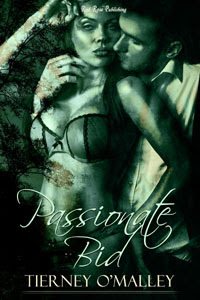 Blurb for Passionate Bid
The destiny of a man
Drop dead gorgeous veterinarian, Julian Ravenwood, has made a mistake--slept with a young virgin, Joanie Saint Claire. Forced to do the right thing, he marries her then leaves while she's still in her wedding gown.
The fate of a young woman
Joanie finds herself facing an altered life after her one night with Julian. She's left alone with a little bug who means the world to her.
The spirit of an abandoned wife
An opportunity to solve Joanie's problems comes when Julian shows up to serve her. She agrees to sign the divorce papers on one condition--he pay her one hundred thousand dollars.
The unexpected love
Julian can't believe it. His scrawny bride has grown into a seductive, attractive, and feisty woman he can't stop lusting after. And she has kept a secret that rocks his world.
Excerpt for Passionate Bid:
It was hard to explain how signing the divorce papers turned into a wonderful picnic in the woods. But whatever it was that changed things between her and Julian would end soon. What came easy would disappear in a hurry. This was momentary. Julian and she were fused together by years of regret and guilt and perhaps pity. And Sam. She should put an end to all of this. Nothing good would come out by letting Julian get too close to her.
The floorboard squeaked behind her. She didn’t turn around. She knew it was Julian. Like in the past, she always knew when he was around, even when he thought she didn’t.
“The pancake is out.” He wrapped his arms around her waist and flattened his hands on her belly.
Joanie was aware of Julian’s erection pressed intimately just above the rise of her butt. Desire quickly consumed her as he pressed hard against her. Dear God, why? After all these years, the pain and tears, she still wanted him. All of him. “She had a great time.”
“Did you have a great time?”
It was the best time of her life. One that she wouldn’t forget. “Yes. Thank you for suggesting a picnic.”
“We could do it again tomorrow and the next day. We’ll do it every day while I am here.”
While you’re here.
Julian’s hand tightened around her waist as he began to nuzzle her neck. “I love your smell.”
“Julian, why are you doing this?”
“I don’t know. All I know is I want you.”
God, she wanted to hear him say those words for years. This—with Julian—was a dream coming true. She should be happy. But what she felt right now was the opposite. “I think we need to stop this.”
“I think we should continue.”
“I’m not sure if this is wise.”
“I don’t see anything wrong with us like this. You’re my wife and I want you Joanie, badly.”
And as God as her witness, she wanted him, too. Julian’s mouth found the sensitive spot behind her ear and licked it. “Julian…please…”
“Let me love you, Joanie. Let me show you what we could have had if circumstances were totally different.”
Joanie didn’t get a chance to answer. Julian pulled the sash tying her robe and slid his hand inside to cup her breasts. The heat of his palm quickly spread around her body. Gently he massaged her breast until her nipple hardened and pushed against his palm. His mouth was hot against her skin.
Julian was breathing hard. She could feel the quick rise and fall of his chest against her back. With her good sense screaming no, she tilted her neck to the side, giving him more access to the column of her neck.
Julian removed his robe and let it drop on the floor. From behind, Julian slowly moved his hands around her to cover both of her heavy breasts. Then he started kneading them with pressure, sending delicious feelings cascading down to her warm pussy and all the way to the very tips of her toes.
“I want to touch you.” She tried to turn around but Julian stopped her.
“In time. Close your eyes, Joanie.”
“This is wicked.”
“Yes. I know.”
Buy link for Passionate Bid
About the Author
Tierney O’Malley began writing her first eBook two years ago when her youngest was in fifth grade. Her publishers are Cobblestone Press, eXtasy Books, and Red Rose Publishing. Today there are eBooks available for purchase on her list. Ms. O’Malley lives with her husband and children in Washington, and is currently working on a new novel and sets of series she recently sold.
Ms. O’Malley is always excited to hear from readers. To leave your comments, questions or suggestions, you can reach her at http://tierneyomalley.com
Posted by Chloe Waits at 12:01 AM

Thank you so much for having me. :) I had fun answering your questions.

Thanks so much for being on my blog Tierney! Congratulations on Passionate Bid hitting the best seller list!

Great questions Chloe. I really enjoyed the interview...you had some wicked answers Tiernay...I love the cover of your new book...tres sexy!

Chloe, Loved your questions, you made me laugh out loud!

Tierney, Congrats on the new release! Awesome interview, you two ladies crack me up!

Thanks for stopping by:)
So glad you liked the interview.
Tierney is awesome!

Great interview! I have another book to add to my TBR list.

Thanks for stopping by. Passionate Bid is currently on RRPs bestseller list. I'm so excited. I had so much fun writing this book.

@Anna-- Hey great seeing you here.Glad you liked my answers. LOL I so enjoyed answering the questions. Different. : )

@Brande--Hey Brande. So sorry I missed you on RITBS. I wanted to hear your opinion on book cover. Thanks for stopping by.

@Chloe--thank you so much for having me. I'll talk to you soon.

Thanks everyone for stopping by.

Brande--sorry I missed you at RITBS. I so wanted to hear your opinion about book covers.

Andrea--let me know what you think about Passionate Bid. I love this book. Hot, romantic and made me cry. :)