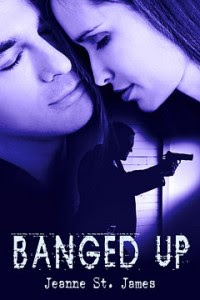 Guest Jeanne St James shares a hot teaser
from her book, Banged Up, today!
Two scarred souls: one physically, one mentally. Both on the mend, hiding from their pasts…
Buy Link


Blurb for Banged Up
Mace Walker can’t wait to get home.
Being buried deep undercover for the past two years, on the most complex case of his career, has torn him down physically and mentally. Now the FBI agent has come home to recover after having his leg badly injured from a gunshot wound. Arriving home late one night, his relief is short-lived as he’s faced with a stranger pointing a gun to his head, acting like he is the one who doesn’t belong there!
Colby Parks, a biochemist at the local university, had come to town a year earlier to escape an abusive relationship. She vows never to put herself in that situation again.
Then the perfect opportunity comes along: house-sitting for Mace’s sister while making the house she purchased habitable. But she couldn’t anticipate this big snag: the one wearing the tight Levi’s and worn leather jacket, looking like he had just escaped prison.
Being forced to share a house creates sparks between them in more ways than one. However, things take a turn when their pasts catch up to them, threatening to pull them apart forever.


Chapter One
Home.
Relief flooded over Mace Walker as he twisted the key in the lock, gave the front door a shove, and stepped over the threshold. Finally home. About time.
Time to heal.
The foyer was dark, but he didn’t need to hit the light switch. Even being gone for as long as he had been, he still knew the house well enough. He made his way to the stairs and set down his bags. Those two small duffels didn’t hold much evidence of his life for the past couple of years. Just some toiletries and a few basic items of clothing.
As he straightened, the foyer lit up, blinding him for a second. He blinked when a young voice rang out from the top of the steps. “Hold it right there! Put your arms up and back away from the stairs.”
What the fuck?
Mace had expected to see his sister bounding down the stairway of his two-story colonial, excited after not seeing her brother for the past two years. Actually, more like one year, eleven months and fifteen days. Not that he was counting. But instead, he stared up into the deadly eye of a Glock. And from his viewpoint it looked like a model 23, a .40 caliber. A compact but still a decent sized gun in a very small, very uneasy hand. Instantly, the hairs on the back of his neck rose.
Damn. He’d dealt with crime bosses and their flunkies--from drug to porno rings--and had managed to survive. Now he was going to be killed by some measly punk he surprised while burglarizing his house? The cruel irony made him want to laugh. Instead, he did as he was instructed. With caution, he raised his hands above his head before stepping back toward the middle of the foyer. He avoided standing directly under the light, trying to get a better view of the top of the steps. But he didn’t have much success; the upstairs hallway and the upper section of the stairway were hidden in shadows.
If he played his cards right, this little situation would be under his control in no time at all. He just had to keep the kid calm and make the skinny punk believe he was the one in command. From experience, Mace knew the Glock didn’t have a conventional safety. All the kid had to do was pull the trigger and pull it again and again until all the rounds in the clip emptied into Mace’s body. And from what he could see in the limited light, the kid’s fingers were twitching from nervousness.
Not a good sign.
Where had a young punk gotten an expensive handgun like that? It certainly hadn’t been in the house. And if it had been, it would have been locked up in the gun safe.
If only he could see the boy’s face. He needed to see the eyes. Without seeing his eyes, Mace couldn’t even begin to predict what the kid would do.
“Don’t you dare move or I’ll blow your face off!” The kid’s voice raised an octave, making him sound more and more like ... a girl.
Tension ran through Mace’s body as the person started down the steps. At first he could see bare toes, a slim calf, then another. His gaze flicked to the gun, before returning to the shapely naked thighs which couldn’t belong to a kid--no way. Especially not a boy. Those smooth legs definitely belonged to a woman--and he couldn’t wait to see the rest of her. So far, the view almost made it worth being held at gunpoint. Almost.
He was disappointed when an oversized T-shirt--shit, was that Marmaduke on it?--blocked his view of creamy flesh. His arms were tired, his leg throbbed painfully, and his patience was wearing thin. But he still wasn’t going to move, since he had no idea who this woman descending the stairs was. His curiosity piqued when she stepped down into the light, which highlighted her long, curly red hair and made her wide, green--glaring--eyes sparkle and snap.
A twitch shot through his lower stomach and landed in his groin. Fear or pain didn’t make him suck in his breath. It was her unrestricted breasts bobbing under the cotton shirt with each step she took. Her nipples stood out like two beacons under the worn cotton. Jesus.
He had to clear his throat twice before he could ask her, “Are you robbing this house, dressed like that?”

4.5 hearts at The Romance Studio!
"Ms. Jeanne St. James has written a great book full of explicit sexuality and overloaded with suspense. There was more than one problem facing these main characters and St. James has integrated the storyline into love/hate/fear in such a way that it was impossible to put down. These two people were both full of past problems which continued to invade their presents and futures. Again, the author has presented the conflicts, as well as the sexual exploitations, in a great way.
There were other characters that made the story complete. They enhanced the plot and kept the story fast-paced and interesting. The actions, both sexual as well as the suspense-filled pursuits were fascinating. This book is definitely not for the faint of heart. I recommend that you read this book. You will enjoy it, I’m sure."


4 blue ribbons at Romance Junkies!
"Jeanne St. James has written an exceptional high action drama. From page one you will be captured by BANGED UP.The dialogue is superbly written and the plot allows you to be kept on the edge of your seat. For those seeking an action packed thriller, I highly recommend to add this title to your must read list."


4 whips at Bella's Erotic Reviews!
"Jeanne St. James writes an exciting action packed romance drawing the reader in from page one and never letting go. I was hooked from the first page of this story. I loved Colby and her fierceness and how she overcame all that was done to her and of course Mace the brooding Alpha Male was a great character to. Even with all his macho pride he still had his doubts and insecurities. The bond that formed between these two was a beautiful thing to read. Both Mace and Colby must learn to trust each other before time runs out and it is to late. Full of action and hot romance Banged Up is a page-turner that is not to be missed."


4 heart review at Night Owl Romance Book Reviews!
"Banged up is an entertaining read..."
"... an enjoyable story."
Thanks Jeanne for sharing your work with us today.
You can visit Jeanne St James:
http://www.jeannestjames.com/
Posted by Chloe Waits at 12:01 AM