Chloe’s Crazy Questions
Not content to just deliver what you may already know about these writers I have on here, I delve in DEEP to their inner most psyche and massage it, until I get a psychological profile Criminal Minds would be proud of….!
The world is ending in an hour, what do you do, and who do you do it with?
JSJ: Ok, I would have to say that I can’t say in public what my first answer would be. So, let’s see what I can share… hmm.
Oh you tease! If you were a cheese, what flavor would you be, and why?
JSJ: So funny, because I’m allergic to dairy. But I’d have to say I’d have to Mozzarella. I’m Italian and I can get warm and gooey. I’m very versatile too, like the cheese which can be used for pizza, Mozzarella sticks, lasagna, Calzones, etc.
You mean versatile like those hot men  you write about? wink.
Five things you can take to a desert island, what would they be?
JSJ: A flashlight, a boat, fishing rod, flint and my iPhone.
Finish this sentence: Love is like….
JSJ: A rock. No, I’m kidding. Love is like a necessary evil. It feels great to love and be loved but it also tends to cause pain and heartache. But as Lord Tennyson said: “'tis better to have loved and lost than never to have loved at all.”
Finish this sentence: my stories are like….
JSJ: A blooming flower. I start with a bud of an idea and they just grow into something beautiful. Sometimes they need trimmed but hopefully in the end they make someone smile.
Favorite action figure or action hero and why?
JSJ: Ooooo. Batman. I love Batman. He is strong and dark and yummy. I loved all the movies.
Mata Hari or Mother Teresa?
JSJ: Mata Hari. Definitely. She was a “bad girl.” She was known for her sensuality and her eroticism
AND, Jeanne is known for her great, sexy books. Like this one!: 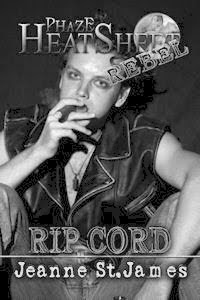 RIP CORD is getting great reviews AND was up to #3 on the All Romance Ebooks Top Ten Bestseller list! And is a #1 bestseller at Phaze for December!

Gil Davis had hated high school. Ever the geek, he had no intentions of attending his 10th year class reunion. The last thing he wants is to relive the taunting and teasing he received during his teenage years. However there is one thing he missed from high school: the star Varsity football player. The one he had a crush on since the first day he laid his eyes on him. But the last thing he expects is the now pro football player to come back to their home town to attend a lame high school reunion. Known as the Bad Boy of the NFL, Ripley “Rip” Cord, not only shows up, but shows up without a date and an eye for Gil.

Thanks for coming to visit Jeanne and answering my 'crazy questions'...lol
I love when you share your excerpts!

Thanks for having me, Chloe! Great questions!